This talk was delivered in Technical Agility Day, Chandigarh (June 15, 2019). 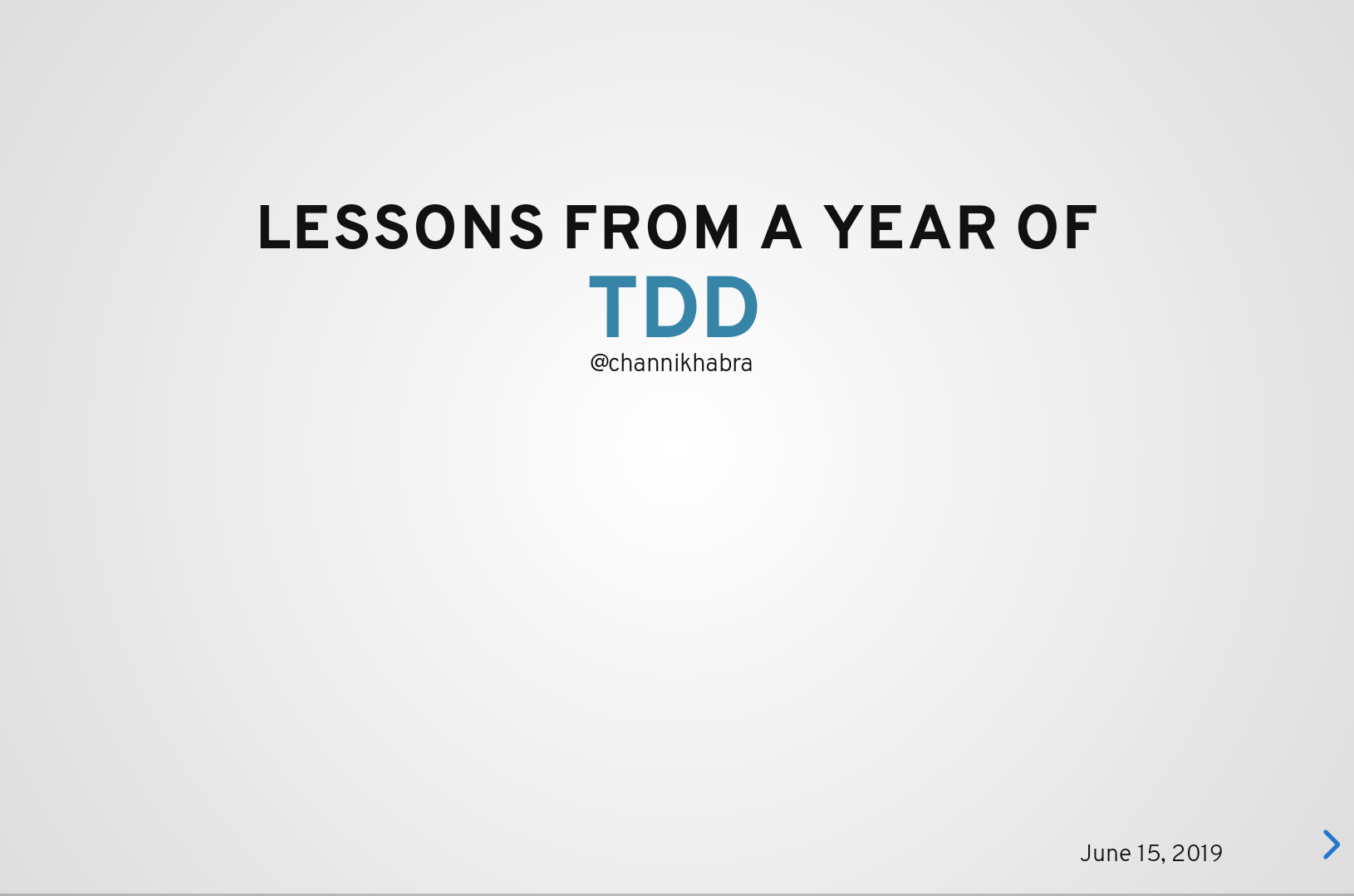 Hello everyone, my name is Charanjit. I am working as a technical lead at Trantor.

I joined Trantor a year ago, in one of Trantor's projects where I was fortunate enough to see people willing to apply test driven development on what was going to become a rather complex project. I am leading one part of this project under a team named "The cloud team". This talk is the story of things we learned while practicing test driven development to build a micro-services based cloud with several third-party integrations.

Our cloud is built primarily with Node.js (express.js), uses GraphQL to communicate with clients as well as for inter-service communication, backed by Azure's CosmosDB (with its Mongo API), has Kafka for messaging queue, and Elasticsearch for complex search solutions. We have about 9 services till today, and 3 third party integrations. We are building an IOT-ish solution, and our cloud primarily serves the android application running on our custom hardware, along with some companion applications (for support and sales).

Before we get into the details of how we did TDD in our project, or of TDD itself, let's take a step back and work out some abstract thoughts. Abstract thoughts about what we are trying to accomplish with techniques like TDD. Actually, let's take all the steps back and go to the very beginning.

In the beginning, there were myths. Humans weren't always recording history. The myths were used to fill the plot holes in stories told by one generation to next. A common and very fascinating theme among the myths of different cultures is that of magic. 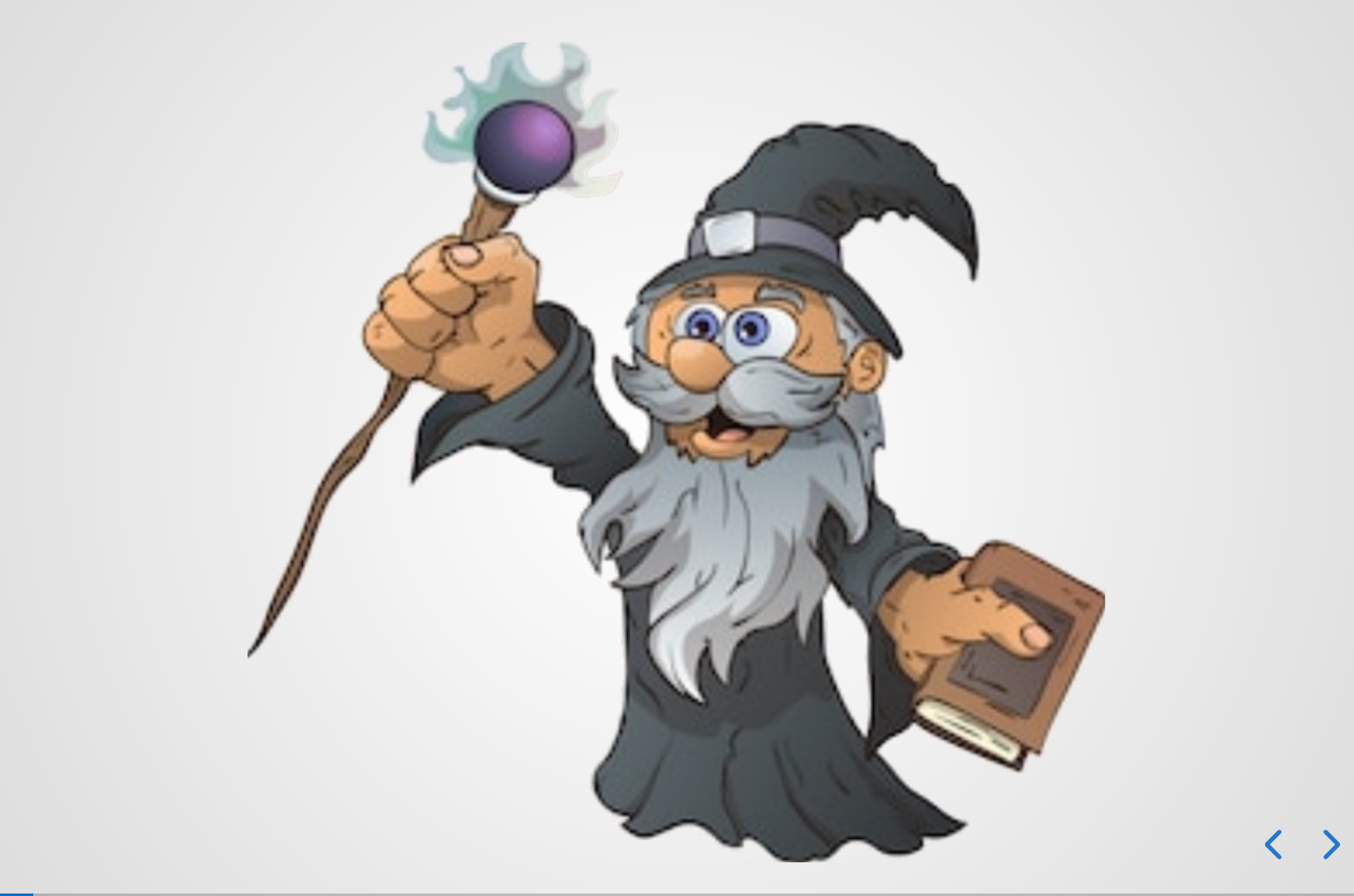 Allegedly there used to be some very special people who could use the mysterious powers. With flick of a wand they could create things out of thin air, they could put life into the inanimate, they could bend the reality itself to their will.

But those were of course myths. What we have now are developers. 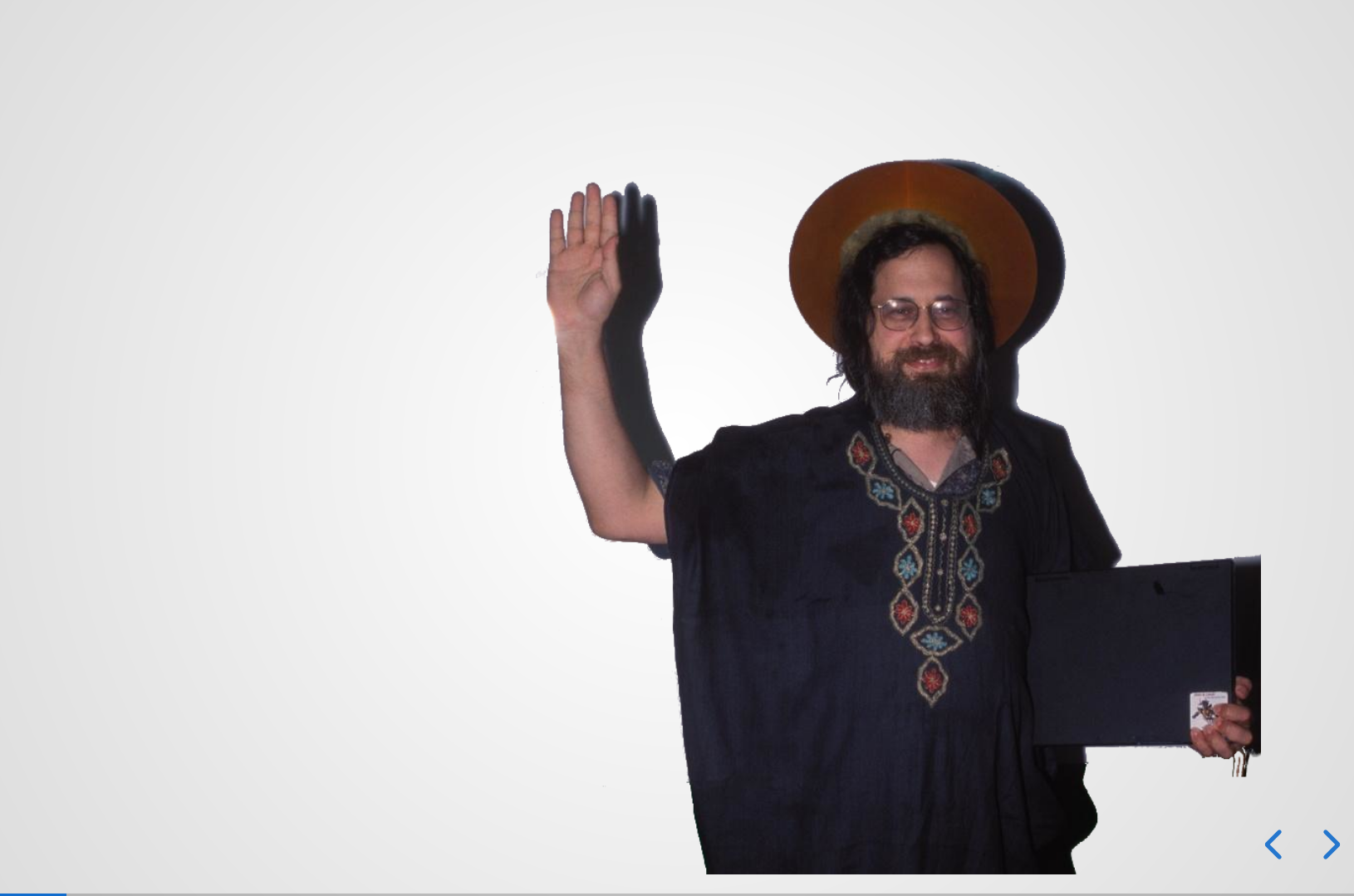 Well, I argue that developers are in fact the wizards of the information age. We certainly meet the criteria: 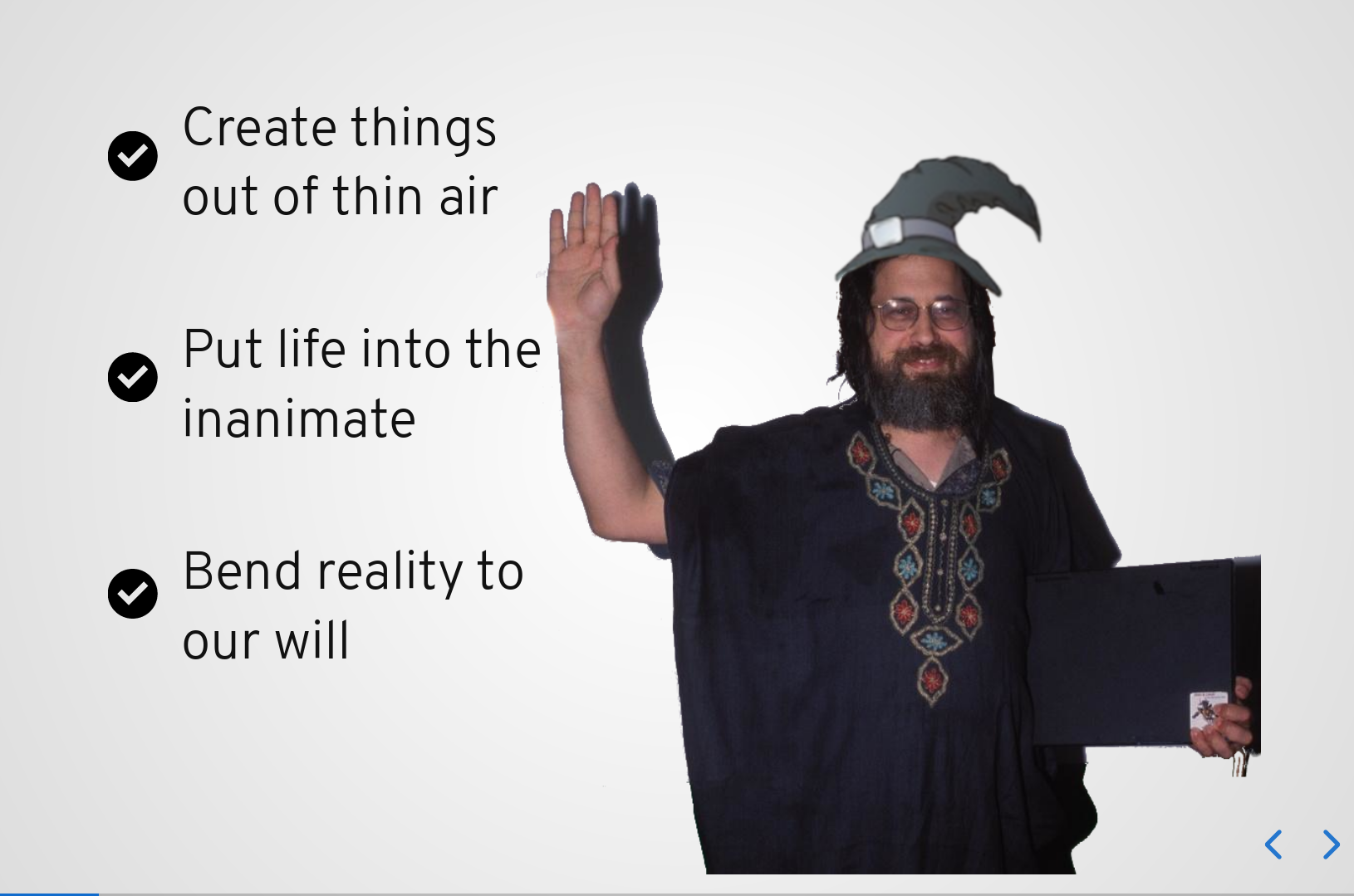 Raw materials for the products a software developer creates are the thoughts. The third point here is the focus of this talk. 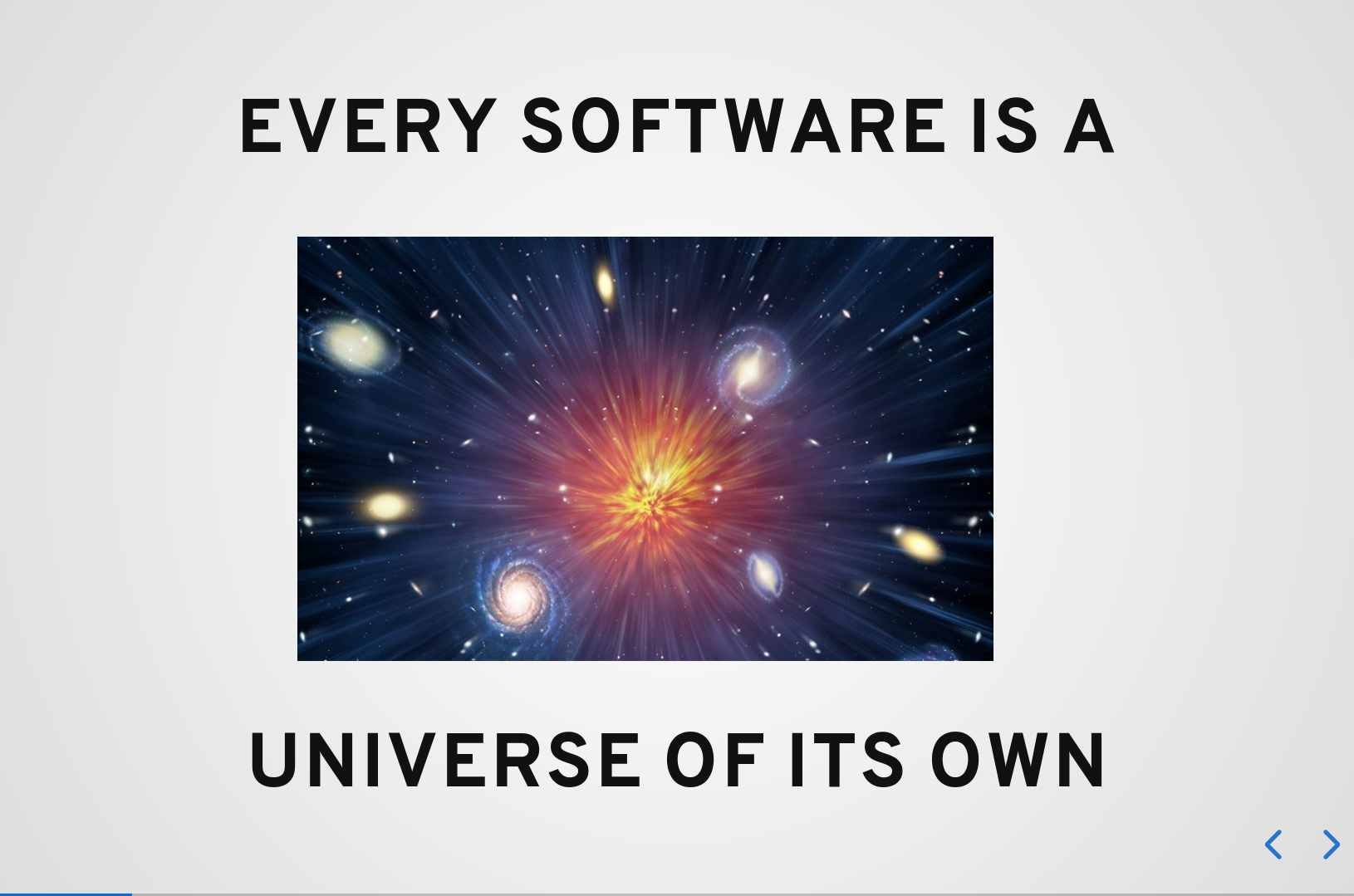 I am not kidding. I believe it is fair to say that every software is a universe of its own. It has its own rules it operates within, its own reality, which is at your disposal to do whatever with.

It is a living and breathing thing which must change and evolve and die as well.

Do anyone here watches Rick and Morty? It is a good show about a rockstar and a junior software developer. Try it sometime. 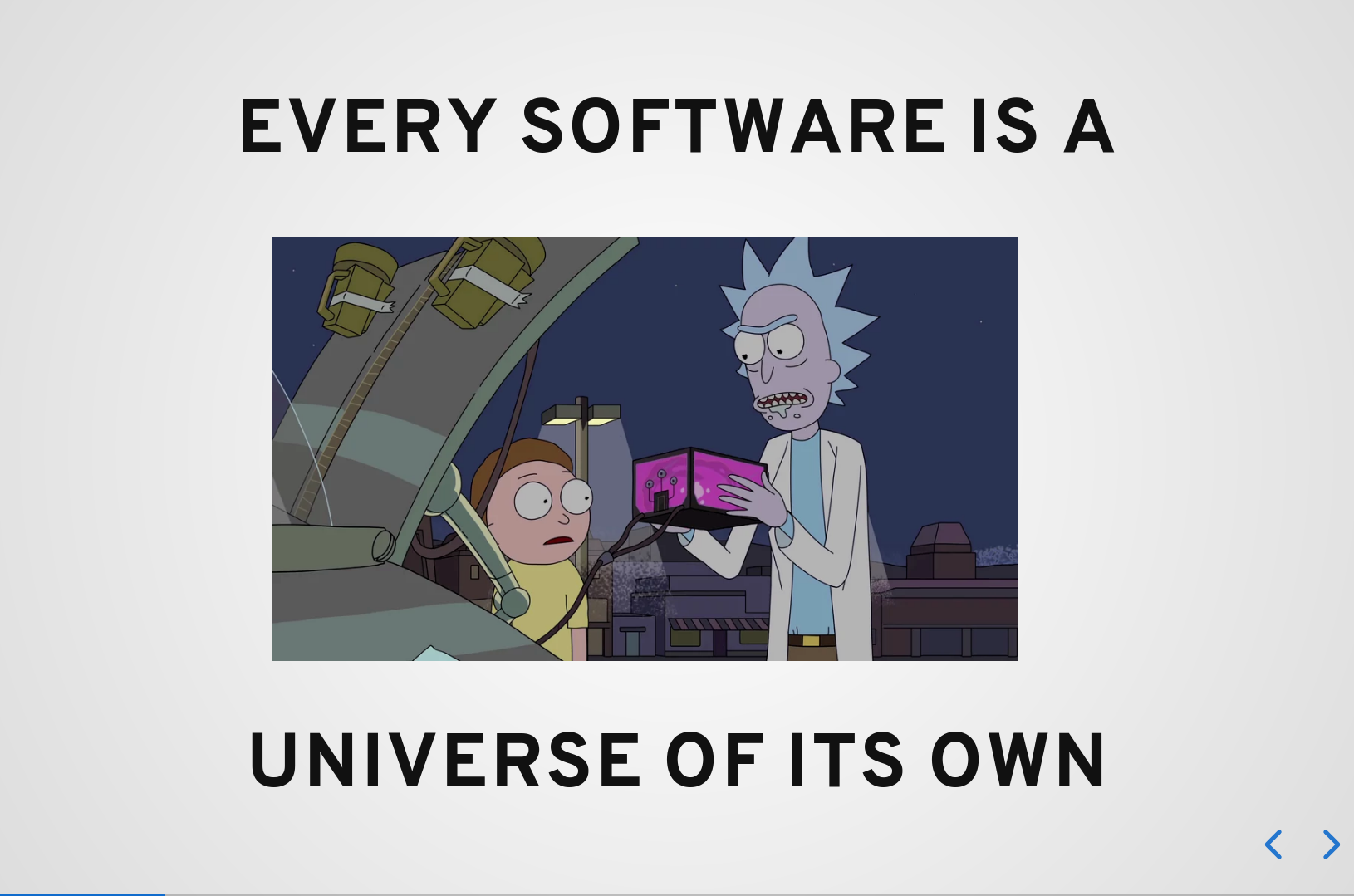 One of the episodes are about the microverse battery. The rockstar developer creates a miniature universe whose sole purpose is to provide power to his car. It is essentially a very complex car battery.

Funnier thing in that episode, the universe within the universe in the battery does the exact same thing. Creates a universe whose sole purpose is to power its host. 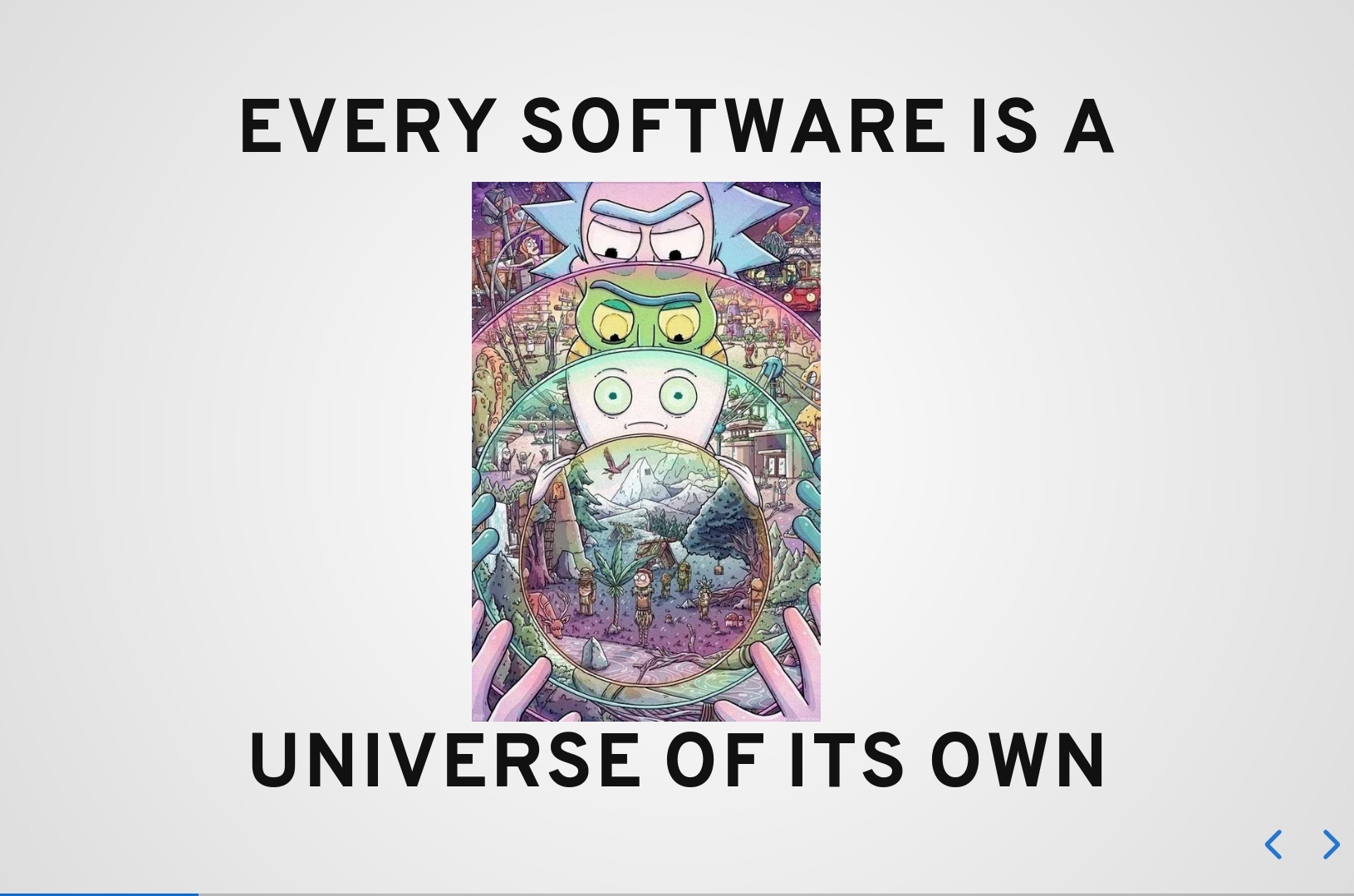 Software we write are not very different. We create entire universe to serve our needs, and it is rarely created in isolation. Usually our universe has a bunch of other, more complex universes wrapped around it. 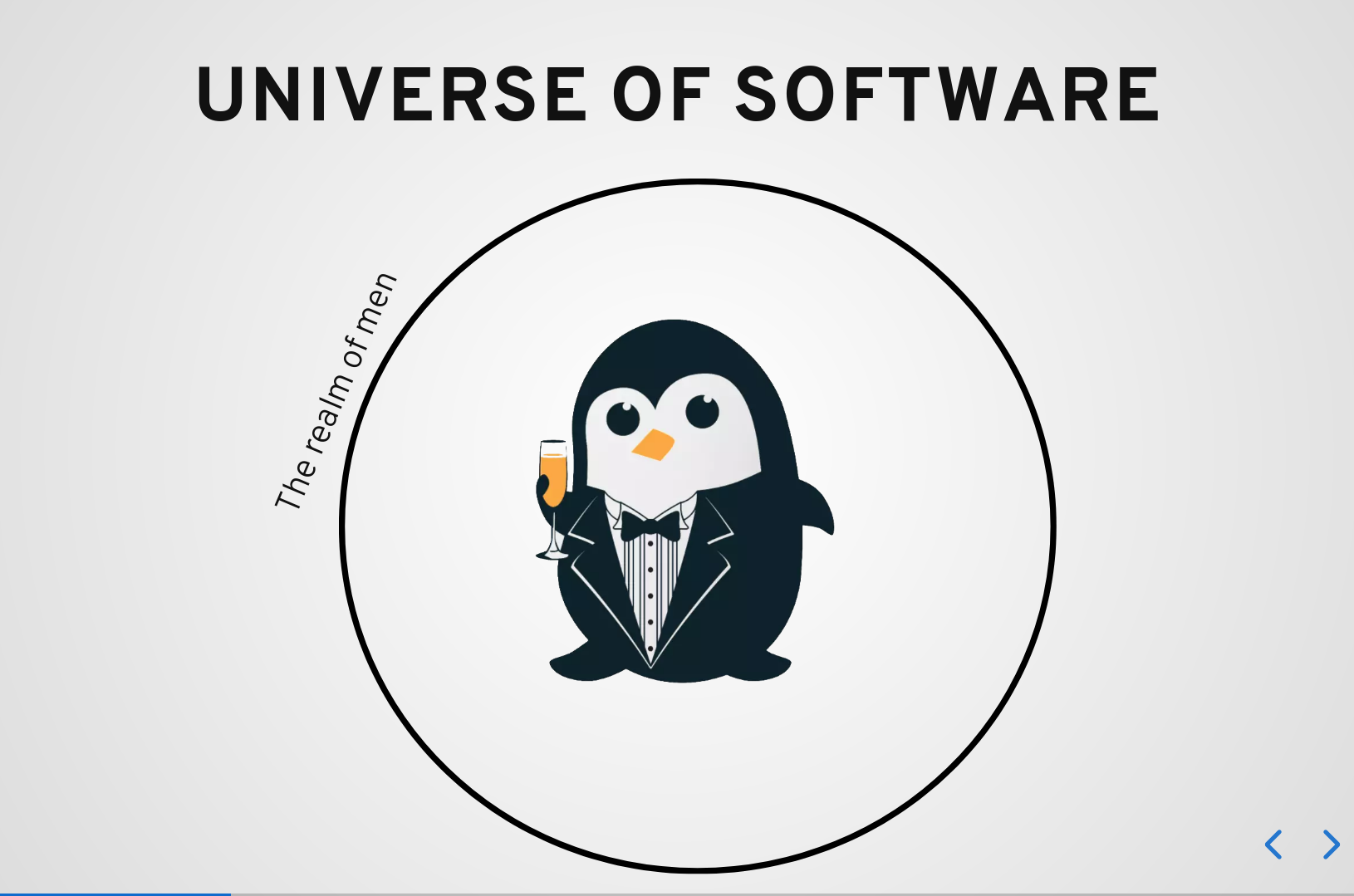 We often start with a base universe of Operating system. The platform, programming language, the frameworks, they all make up for our initial "empty" worlds. They set up their layers of rules, on which then we write our own. Layers and layers of worlds. 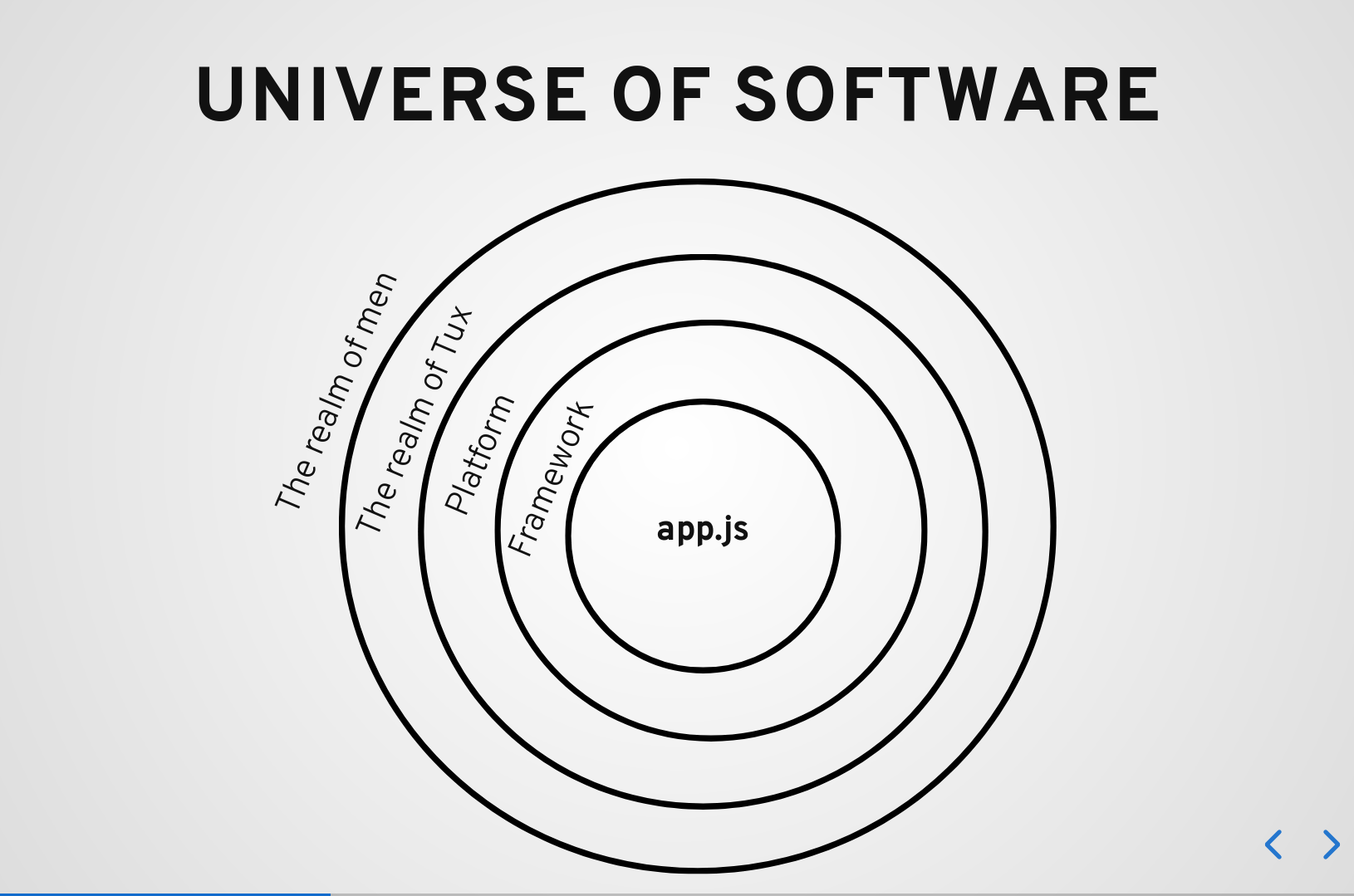 Now, how do we populate this empty universe with the inhabitants which would do our bidding? Well, with our thoughts and prayers of course. 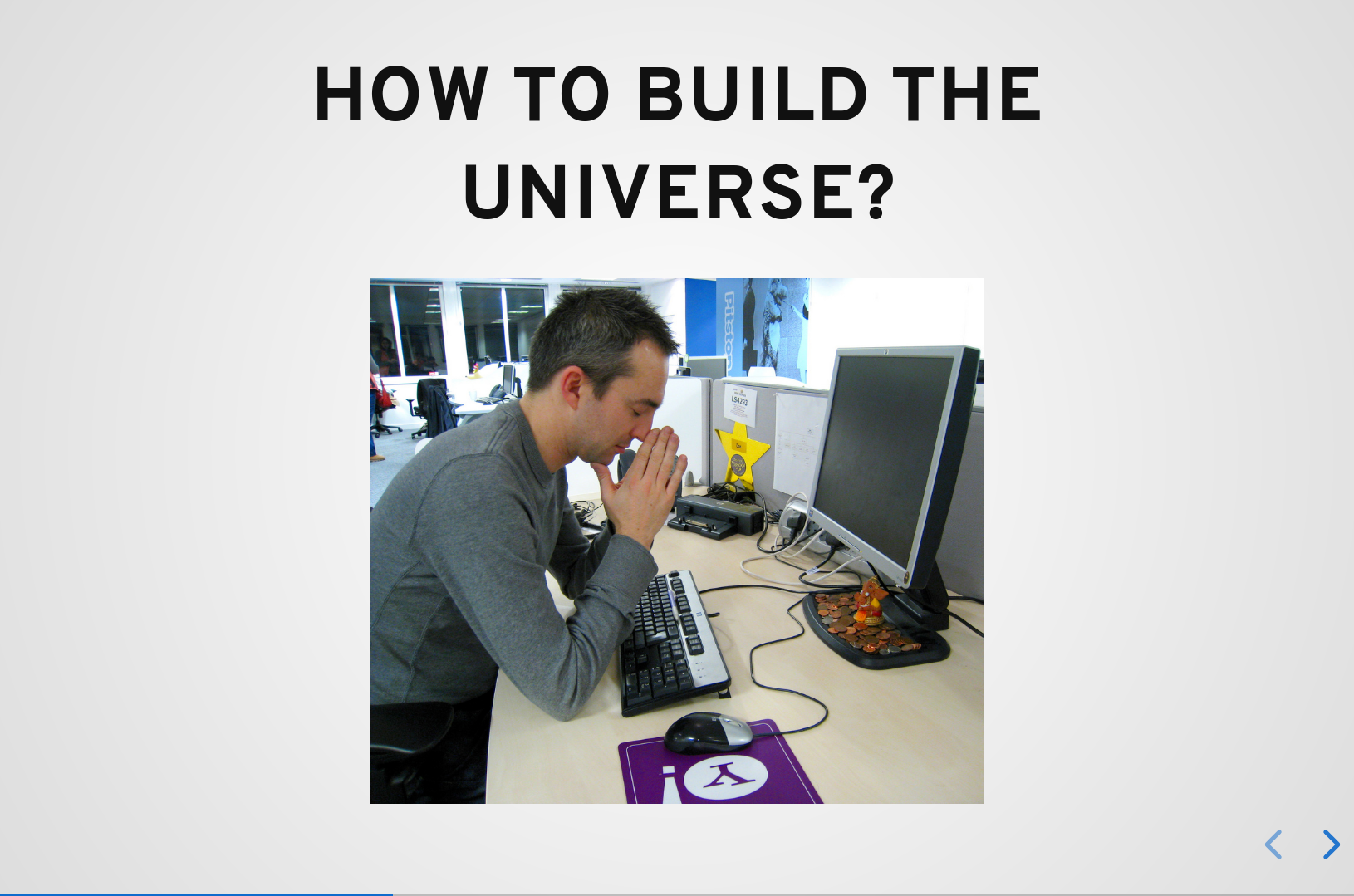 I am not kidding. But you get it, you aren't laughing. We literally send our thoughts, often prayers as well, formulated in some special form governed by some programming language to a compiler (or interpreter), which then inhabit and basically forms the universe of our software.

Asgard isn't a place. Asgard is its people. 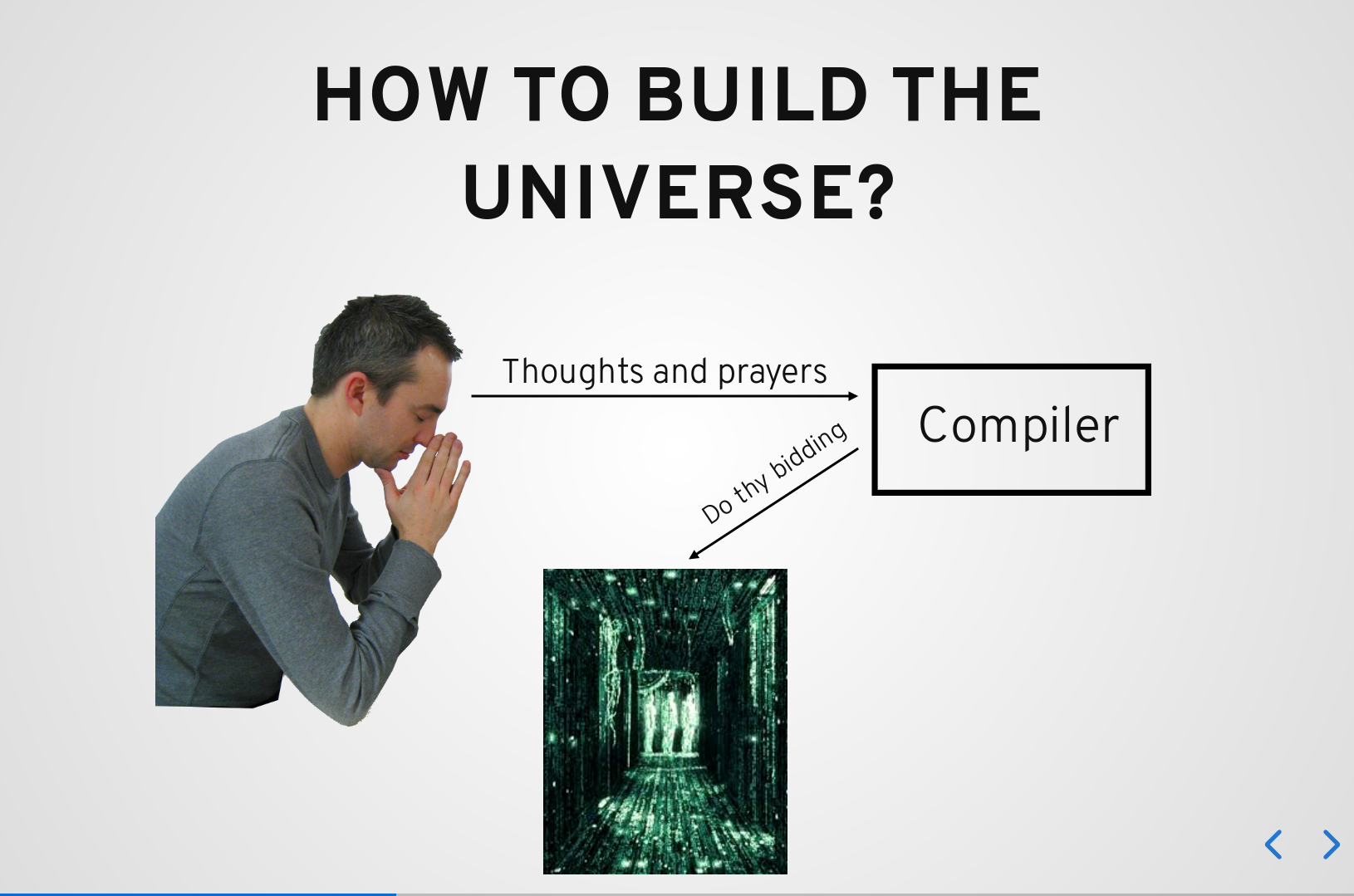 That brings us to the corollary which takes us in the general direction of practices like Test Driven Development. 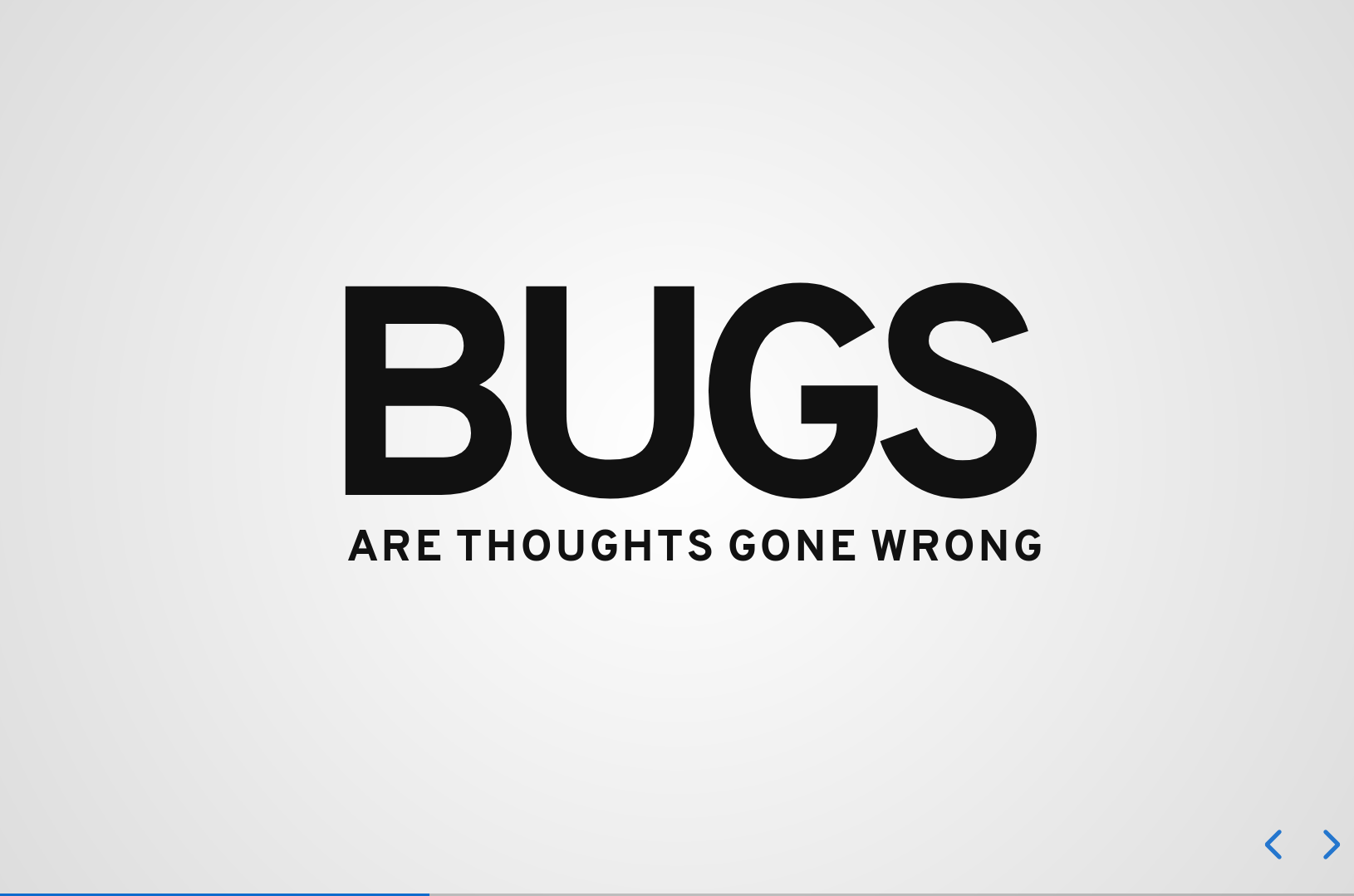 Correctness of software is inversely proportional to the client side product team.

We can create correct software if we can validate the correctness of thoughts that get into the system, and those that reside it subsequently.

This is what TDD essentially do. 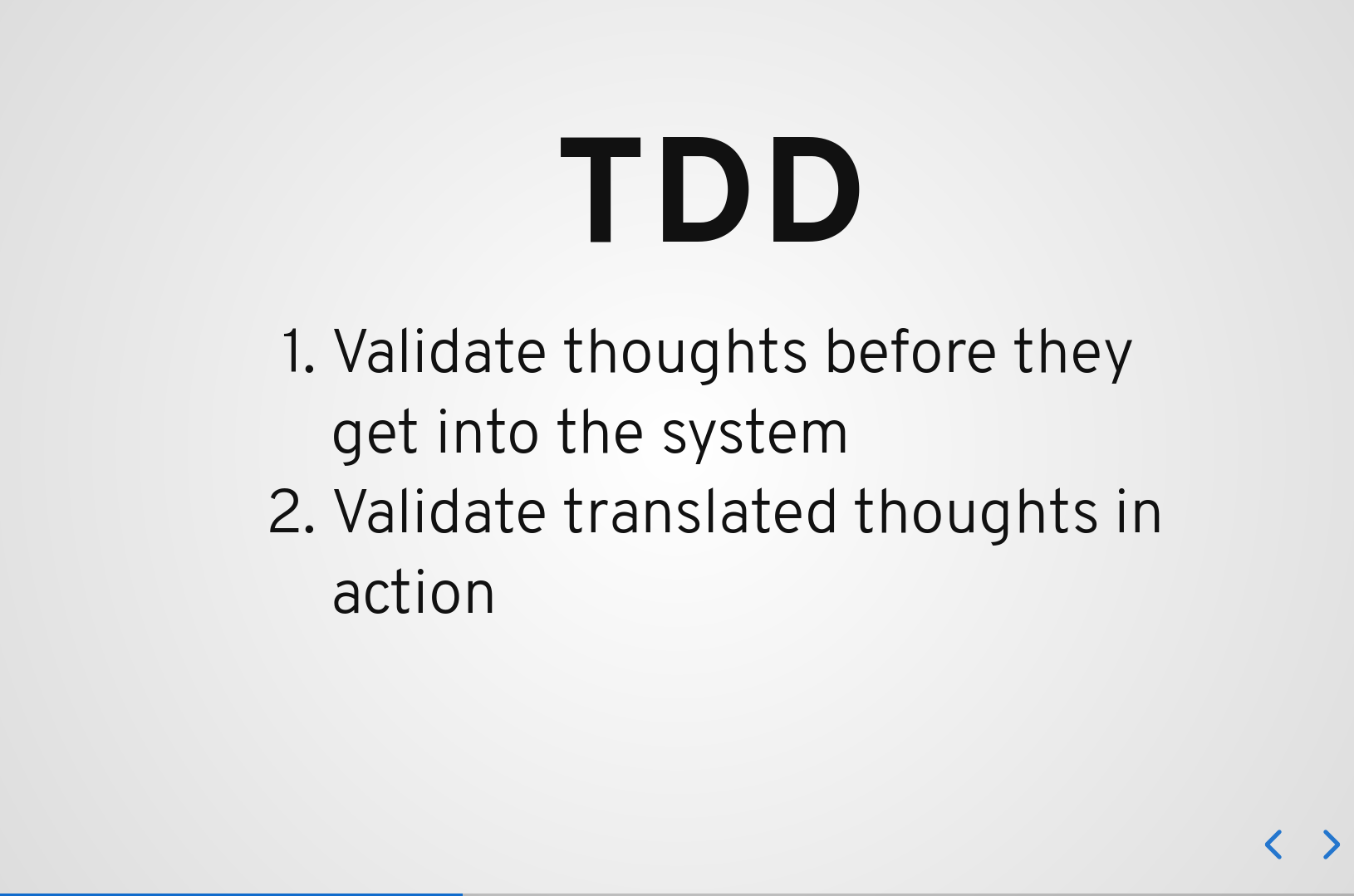 The first point points to the red-green-refactor cycle. When doing TDD, you write down the "what" aspect of the unit/module/function you are going to write. It essentially allow you to pause, sit back, and think about what you are going to implement. How it should behave.

The second point points to the help we get from our well-written tests when we have to then make changes in our.

This one is half a myth. TDD does consume time when you are starting. Your mileage may vary depending on how much experience your team has with TDD, initial time consumption is more if there is a learning curve involved. Disregarding the learning curve, developing same features took us roughly 30% longer to develop new features in our project. 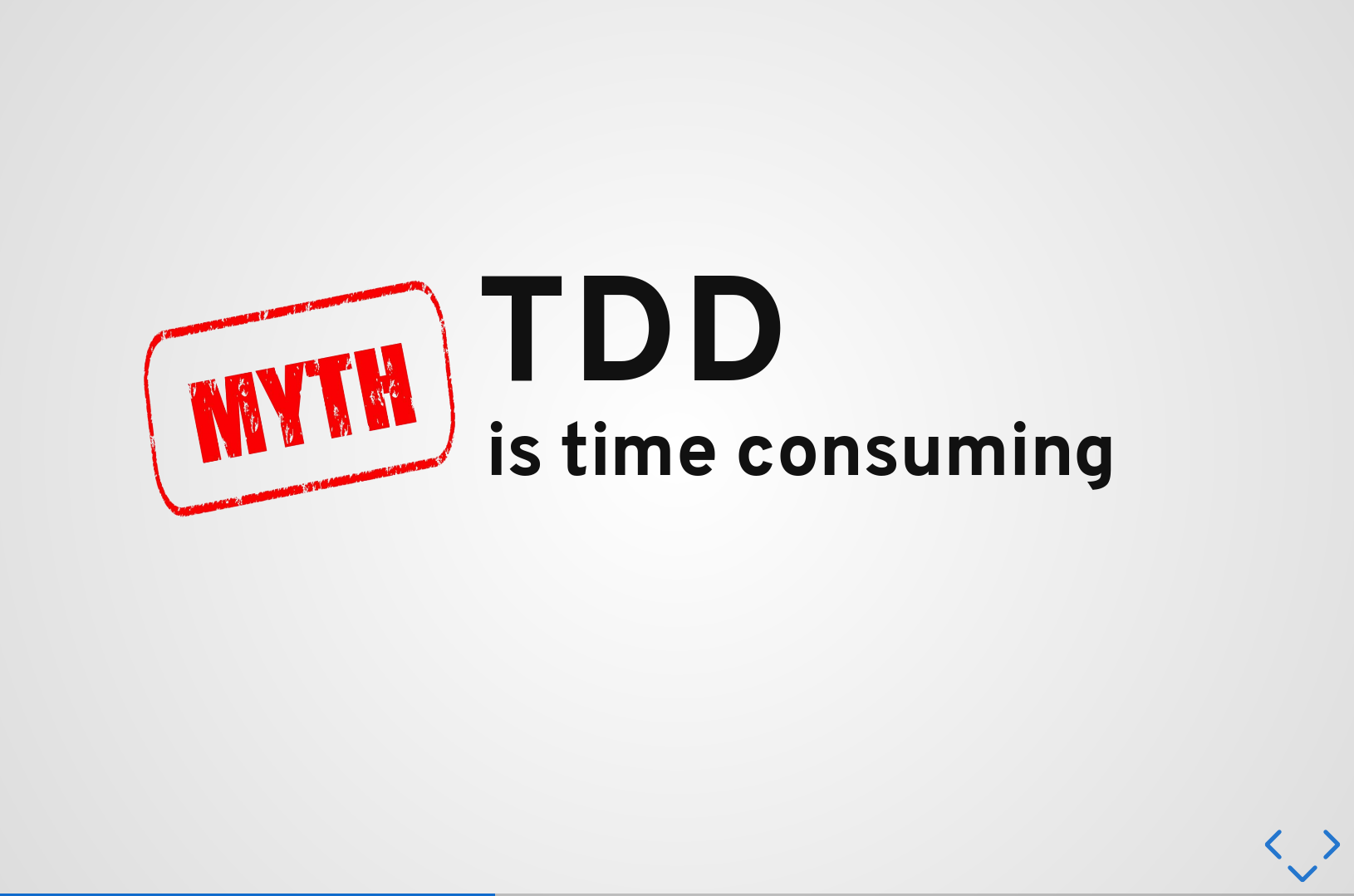 But this time is an investment you are making into your software, as well as your developers. When the project started off, we did start off slow. Other teams (there are 3 including us) were delivering more "story points". After about 3-4 months however, both other teams had dedicated processes set up to tackle bugs, to prioritize and decide which bugs to quash and which ones to live with. We still don't have any process explicitly for bugs.

Our product is a startup, we have been going through a lot of changes and pivots throughout the year. While other teams were struggling with new bugs after every such change, we were delivering at pretty much the same pace. Every bug that occurred in cloud got test(s) for it too, so no mistakes were repeated. Till now, we have been able to keep the list of bugs small enough that we don't pay particular attention to it.

On-boarding new people to our team was a no-op, we would just give them an overview, and tell them to run the tests. We did put considerable amount of effort to make the tests our live documentation for developers, and it paid dividends. 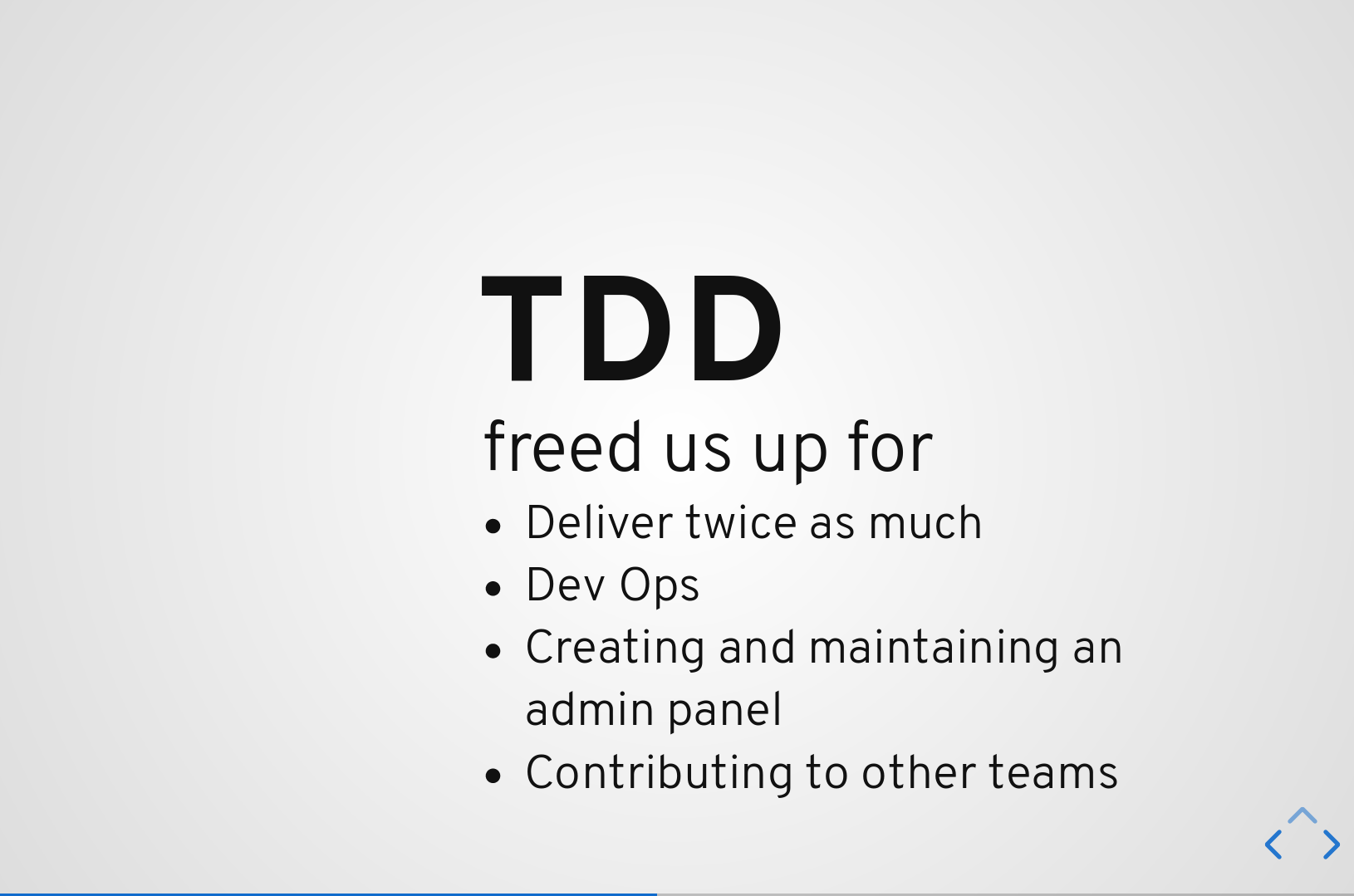 Not just that, TDD actually gave our team to do more than just our assigned duties. Most notably, we were able to not have a separate dev/ops team at all, and took care of provisioning a cloud with IAC (using Terraform and Ansible), and a small sized K8s cluster too. Our development environment is pristine as well. It just takes a single command (docker-compose up) to get the complete cloud (including log aggregation, Elasticsearch, Kibana and Kafka) running on new machine.

It is not. "DD" in "TDD" is more important than "T". We learned this the hard way because of lack of experience with TDD. When you are applying TDD on a new project, your tests should be driving the development. Tests by themselves aren't the goal. The essential thing you must do to ensure this, is to ensure that you write tests first. 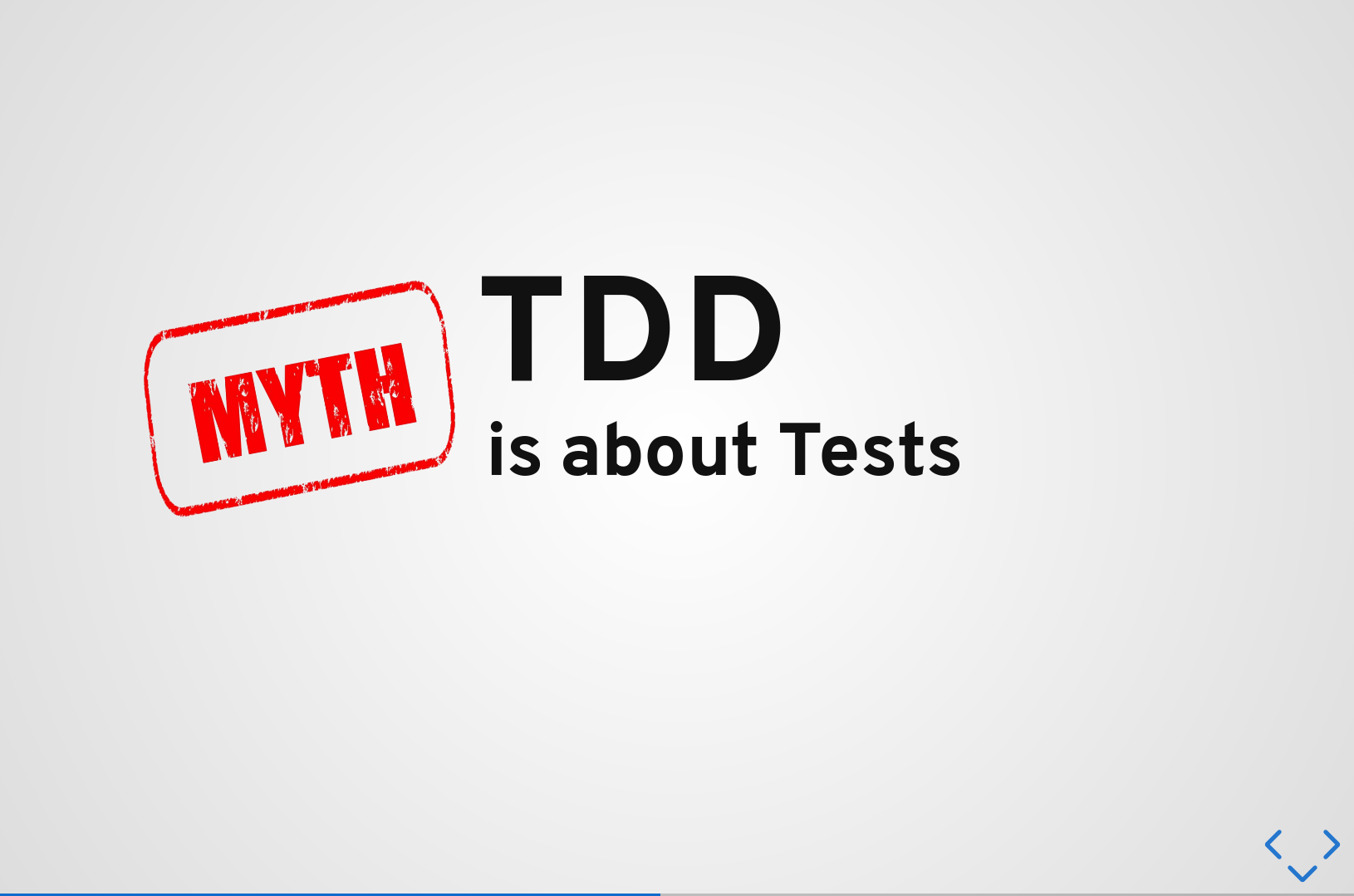 Tests written after the fact are practically handicapped. No matter how good a developer you are, when you are writing tests after you have written the feature/code, the "how" aspect of your code will creep in, and your tests will never be as effective as they could have been. Same goes for the feature you are writing.

This is what I've been advertising so far, ain't I! Well, it is not a 100% truth. Even if we ignore the fact that your tests will almost never be 100% complete, TDD will not guarantee a fully correct software. 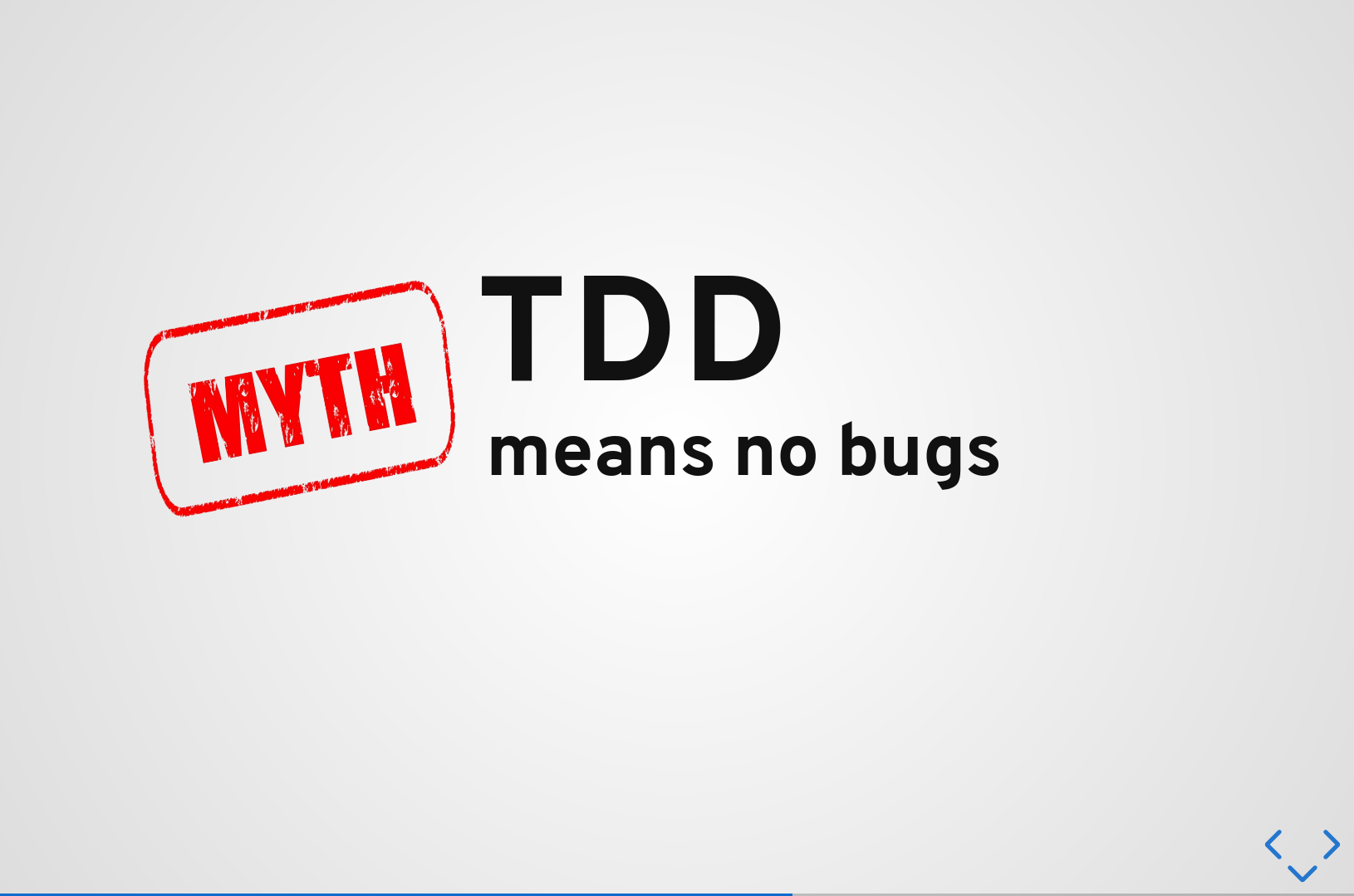 TDD is your last line of defense. By the time you have sat down to judiciously implement TDD, the thoughts that are going to populate your software's universe have already been set. All you are going to do is verify that they behave as it has been decided. 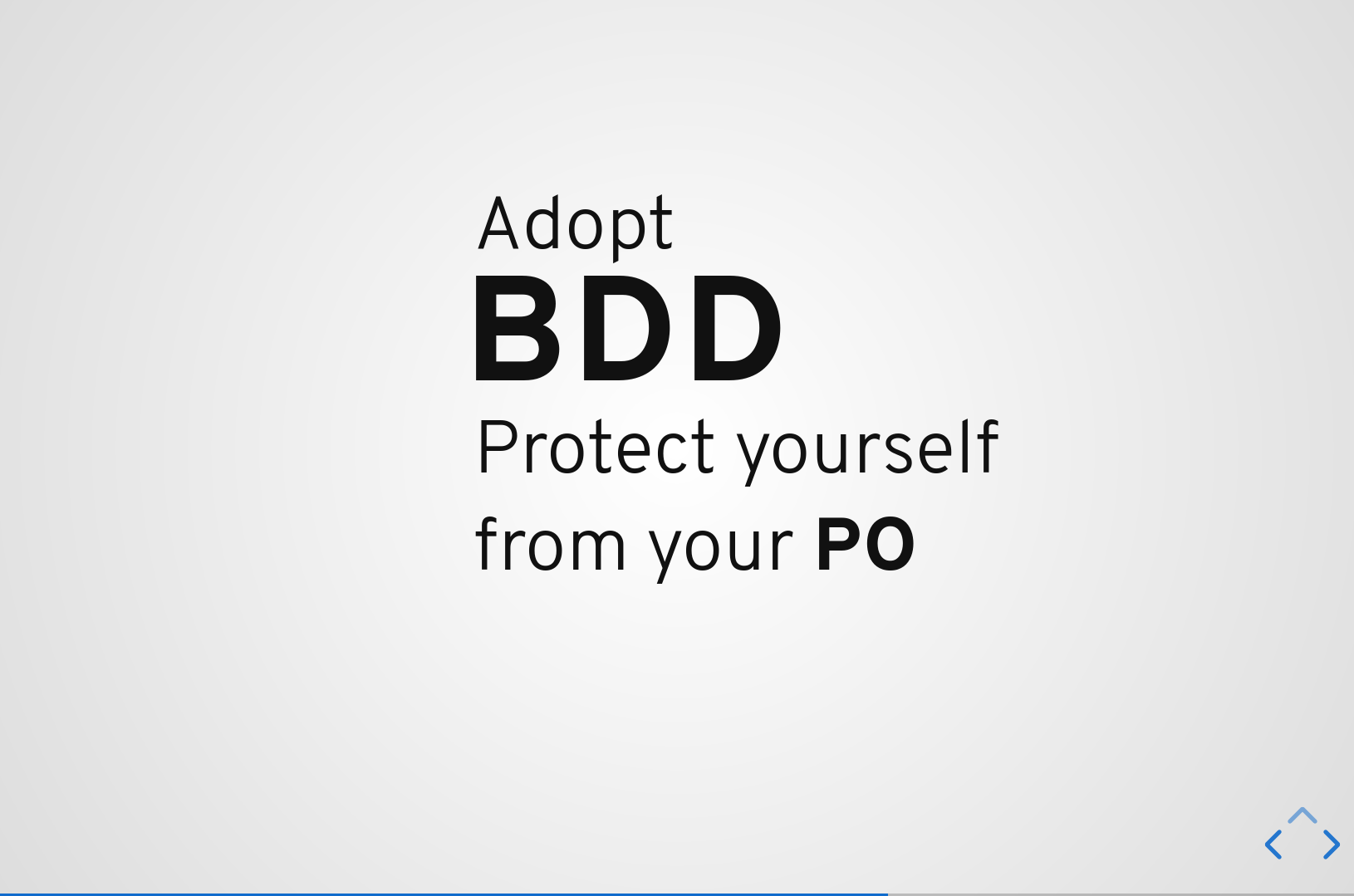 BDD operates at a much higher layer than TDD. At the layer where discussions are done and decisions are made. I believe a combination of BDD and TDD can create a very solid software. We adopted BDD in our project at a much later time, looking back at the long meetings we used to have, I can see how much time and confusion it could have saved us.

Grow as a developer 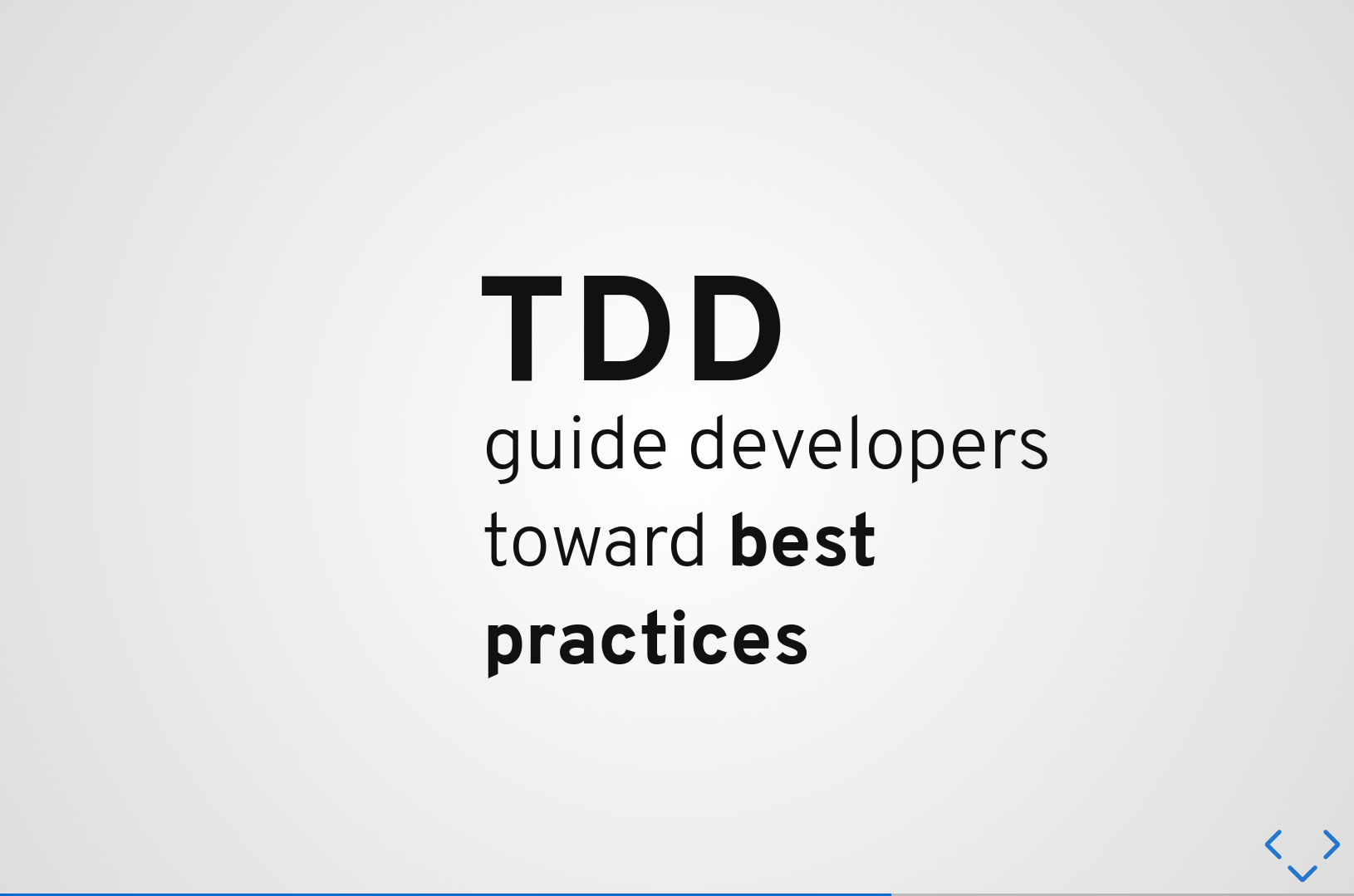 It was an interesting observation. Team seem to have a much higher appreciation for design patterns like dependency injection. We also observed a shift in PR review comments toward a focus on software design and architecture. Discussions we used to have to make our TDD approach more fruitful brought a cultural shift in the team.

When adding TDD to a new team 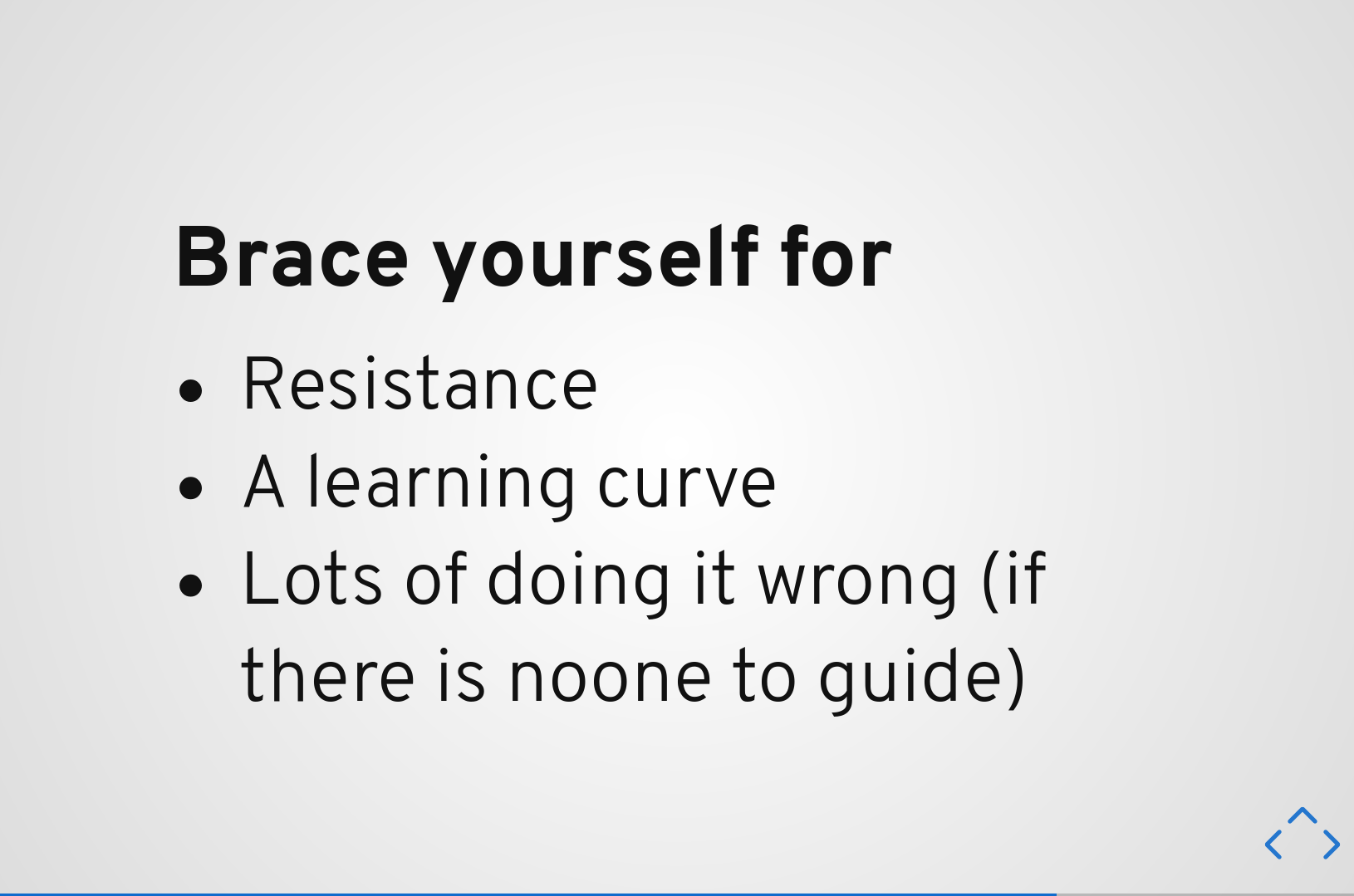 Biggest resistance we faced was convincing developers that it's worth their while to write tests before they write code for their code. We ended up introducing an extra step in our PR review checklist: ensure there is a "test:" commit which only has test descriptions. This helped somewhat, but it took some time (and a lot of pair programming) till developers realized the benefits of this process.

Things I wish we did 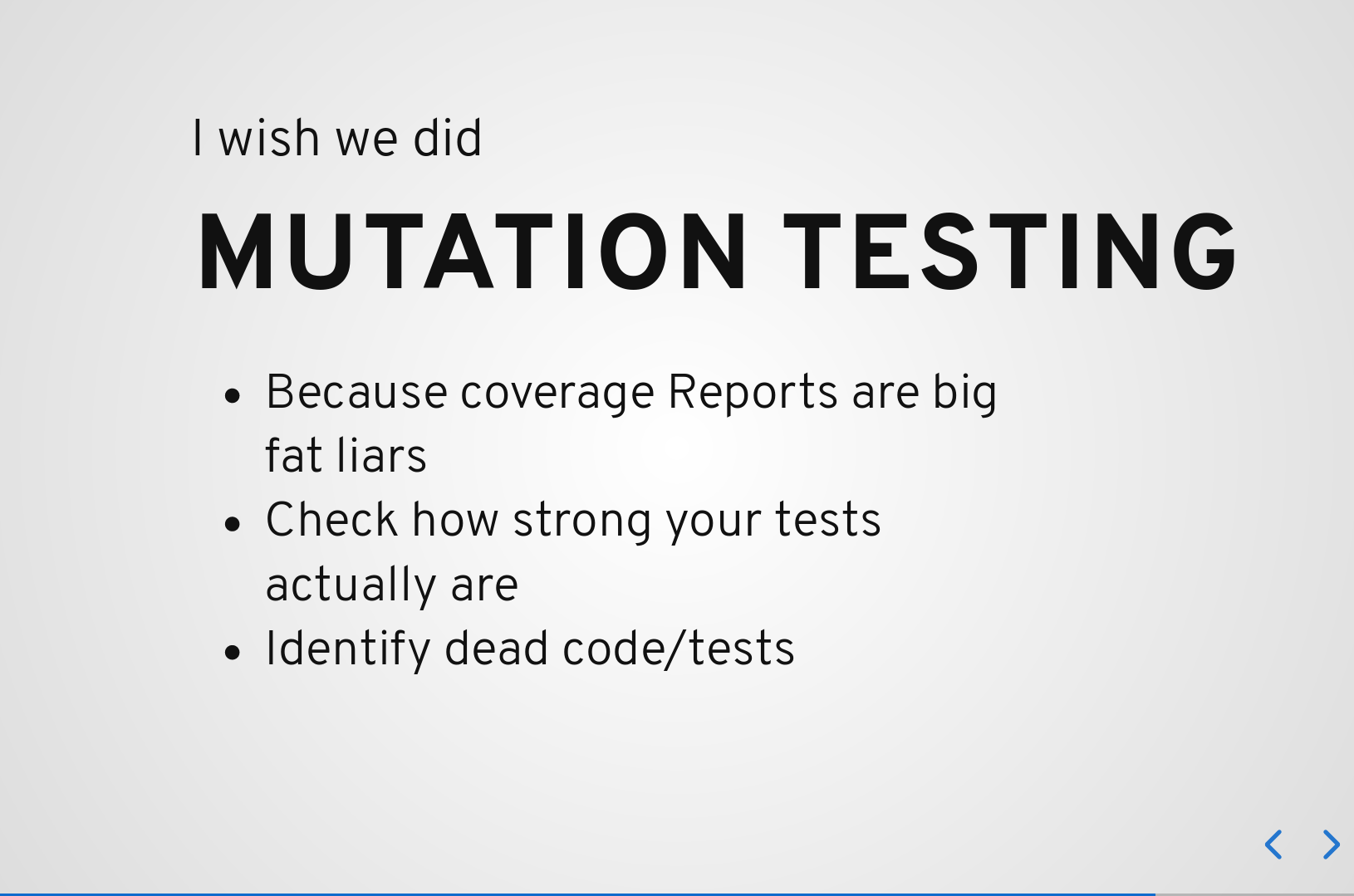 So, coverage reports are big fat liars. They don't tell you how your tests are doing. In my opinion, they are more like the Velocity Charts our Scrum Master loves so much. They tell you if you are going in the correct general direction, and it is very easy to make them lie.

Mutation test is a rather interesting concept that we played around with. Big idea is that the test-runner can modify your code (e.g replace an if condition with true and false), and re-run your code to verify how many mutations it can withhold. It gives a lot better insight into the strength of your tests.

We experimented with mutation testing for a while. But I suppose because of lack of integration of a platform for our CI (Bamboo) to present thorough coverage reports, we haven't yet made mutation testing a part of our test process.

I can see how it can make PR reviews a lot more effective though. I hope we can take some time out of our everlasting "churn mode" for this. 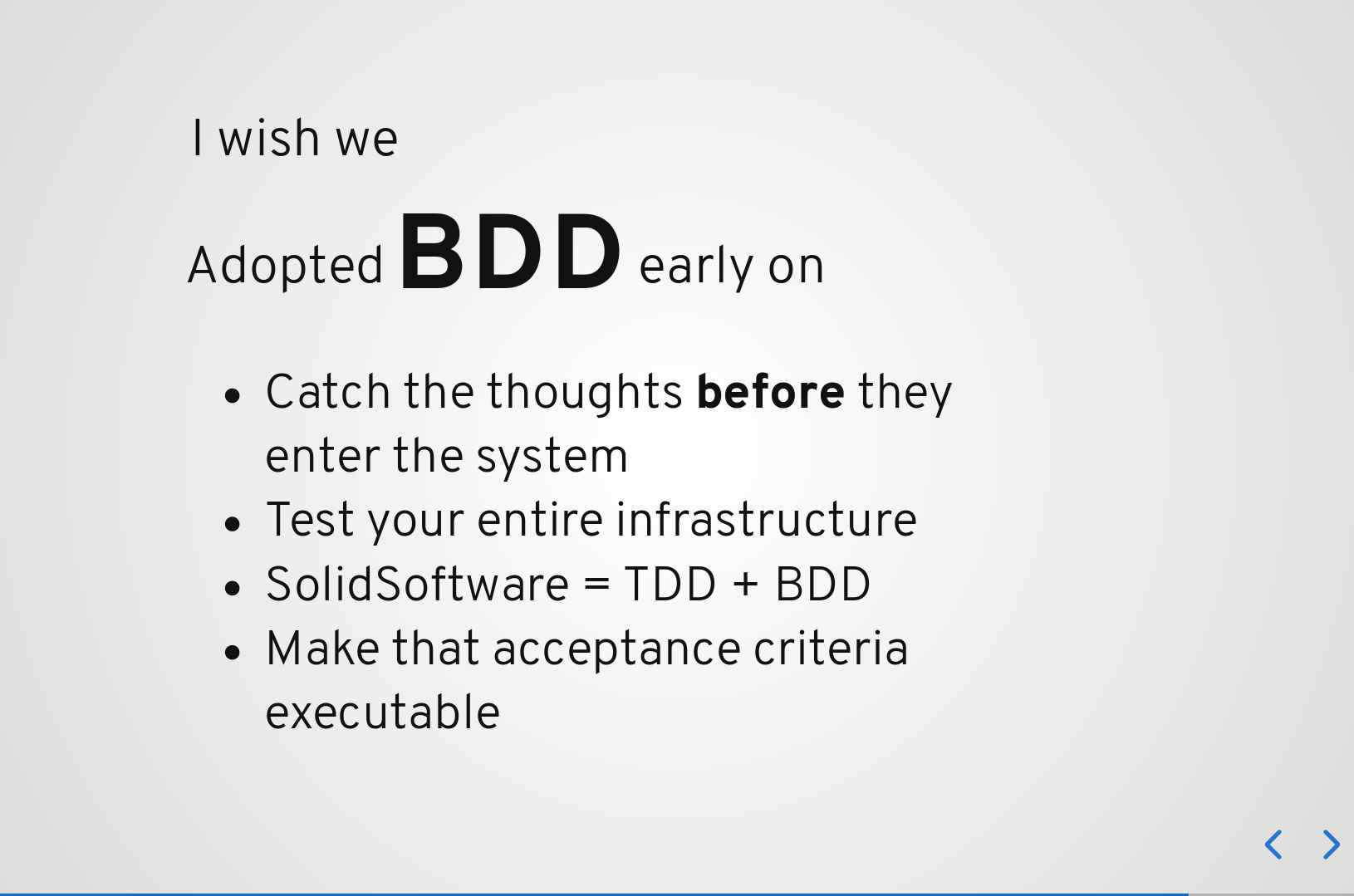 We implemented BDD a bit late (just a couple months ago) when we had some critical modules for which we wanted automated tests, which required the complete cloud up and running. Like all software projects, we have always been on a rather tight schedule :-)

BDD could have saved us a lot of trouble and confusion. It contributes immensely to help you maintain a ubiquitous language of the project, and make the communication between product people and developers much more correct.

I apologize for rushing the transcript a bit in last few headlines above. Need to get this off my todo list :-). If I get to deliver this talk again at some occasion, I will revisit and will probably add some velocity/burndown charts from Jira as well. 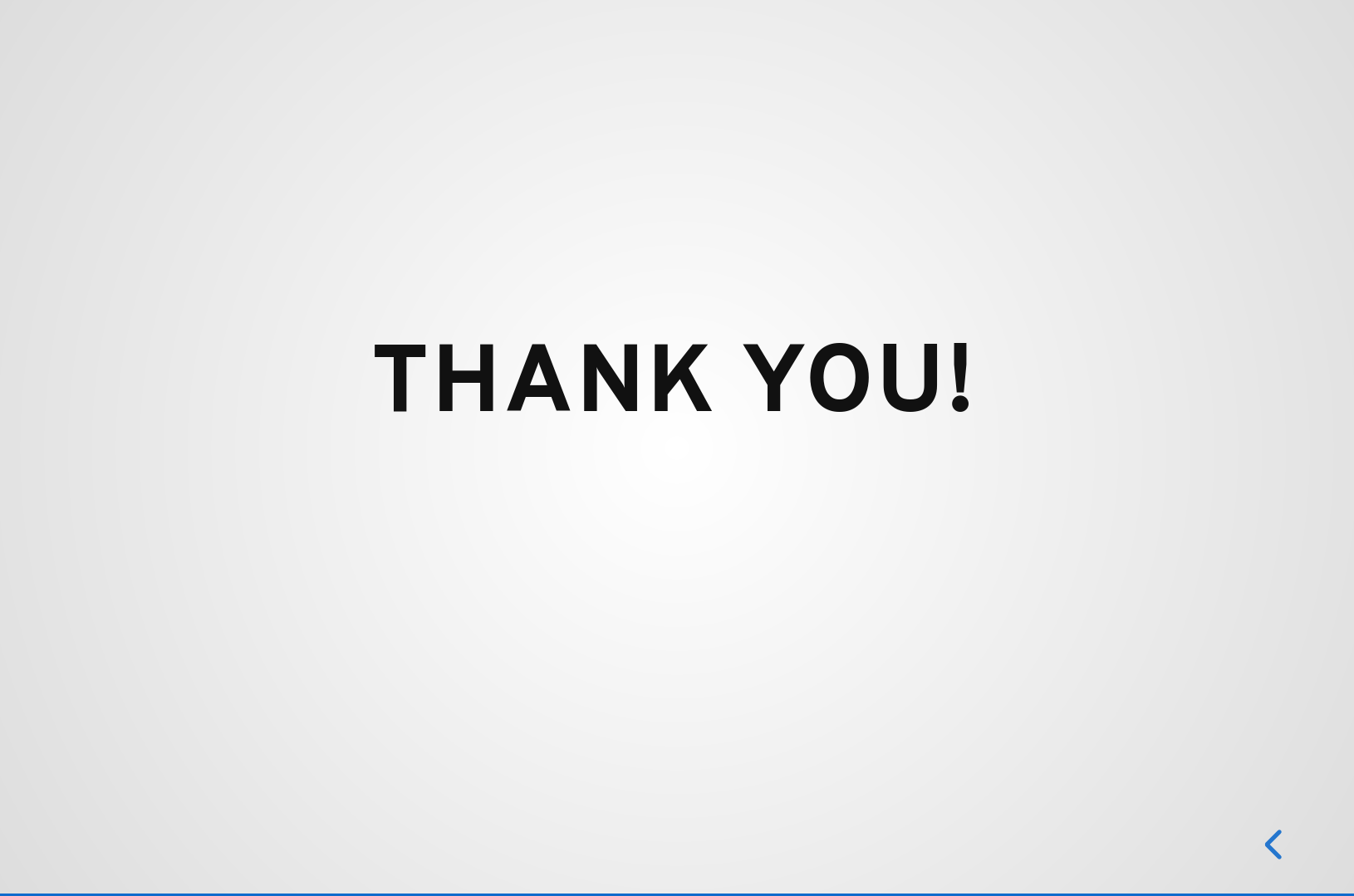